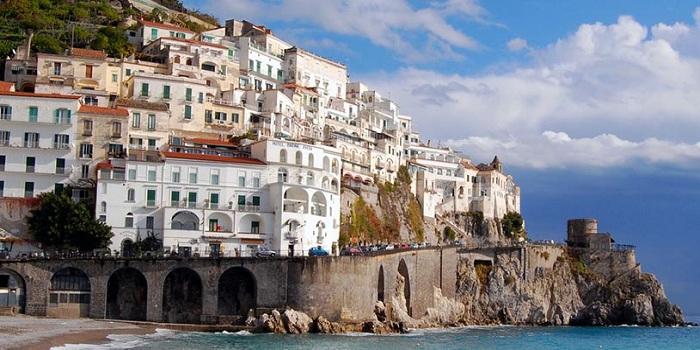 Amalfi, originally roman, was the first Sea Republic of Italy (around 839). After the fall of the Roman Empire, it was the first city to re-establish reletionships between East and West by transporting and introducing into Italy exotic merchandise such as carpets, coffee and paper. Amalfi had its own coin (the Tari), was the home of Flavio Gioia, the inventor of the compass and gave the navigators the famous maritime law known as " Tabula de Amalpha".

Amalfi, romantically situated at the mouth of a deep gorge - in the middle of Amalfi Coast, is a quiet and pictoresque seaside resort with a temperature climate and incomparable natural beauties.

The Duomo build about the 6th century and dedicated to St. Andrew the Apostle whose remains are kept in the crypt. Its present facade, brilliant with mosaics, is in Oriental style; its bronze doors, the first ones to appear in Italy, were given to Amalfi by Pantaleone di Mauro Comite, a noble man from Amalfi who melted them in the 11th century in Constantinople where he lived and led the empirial Party.
The Cloister of Paradise set beside the Duomo was built the 13th century in Arabian style. It holds ancient sarcophagi, marble sculptures and mosaics.
The Ancient Armouries of the Amalfi Republic, dating back to the 9th century, witness a glorious maritime past.
The Salone Morelli where you can admire the 14 paintings by Domenico Morelli, reproduced in mosaic on the fronton of the Duomo; some paintings and sketches by the Amalfitan painter Pietro Scoppetta and the artistic pluteus holding the only existing specimen of the "Tabula de Amalpha"; the costumes for the Regata etc...
The Valley dei Mulini (Valley of the Mills) uphill from town, was for centuries Amalfi's center for papermaking, an ancient trade learned from the Arabs (who learned it from the Chinese). Beginning in the 12th Century, former flour mills in the town were converted to produce paper made from cotton and linen, being among the first in Europe to do so. In 1211 Frederick II of Sicily prohibited this lighter, more-readable paper for use in the preparation of ufficial documents, favoring traditional sheepskin parchment. Natural waterpower ensured that the handmade paper was cost-effective, but catastophic flooding in 1954 closed most of the Mills for good, and many of the them have now been converted into private housing.
Museum of Paper (Museo della carta) opened in 1971 in a 15th century; paper samples, tools of trade, old machinery.

Historic Regatta of the ancient four Sea Repubblics: First Sunday in June (every 4 years), by turn in the cities of Amalfi, Genoa, Pisa and Venice.
Every year in springtime, Amalfi celebrates her glorious past as a Maritime Republic with an Historical Regatta, including perfectly recreated period costumes and sea vessels, representing the four ancient Maritime Republics: Amalfi, Pisa, Genoa and Venice.
St. Andrew: patronal festivities on 25th, 26th, 27th June and 30th November.

Useful Information:
Just up the main street of town (from the main square head up Via Genova) and you’ll find a small paper museum (it’s located in a former 13th century paper mill). It’s interesting and appropriate as paper was introduced to Italy by Amalfi. It is a bit of a climb so pace yourself along the way.
Travelers can make use of a combination of the bus and the ferry system to get around to most major tourist attractions in the area as well as to a number of off the beaten path locations.It's possible to start a boat journey from Amalfi to the beauties of the coast, amazing paths between caves and little creeks. Astonishing place for sea lovers.
Looking around town and the surrounding hills, you'll quickly see that the primary product of the area is enormous orbs of lemons, picked fresh to make limoncello liqueur and used in local dishes, as well. The lemon motif shows up in regional ceramics and citrus scent fills the air as you meander about.
Amalfi a place without comparison, so much so that it has been said: “For an Amalfitan the day he goes to heaven is just like any other day”.
Just north of Amalfi is the Grotta dello Smeraldo (The Emerald Grotto). You get a bus or a taxi to the elevator that takes you down to the sea, you pay admission and then get in a boat and head for the green cave — sounds touristy, but it’s a great way to spend time on the water and you’re rewarded on sunny days by the colors of the grotto.
Market day in Amalfi is Wednesday.!