Set into the mountain, surrounded by rich mediterranean vegetation, Positano is so picturesque as to seem a spontaneous stage setting. This village is located at the beginning of the Amalfi Coast - coming from Sorrento.
Seen from the sea it looks like a huge nativity scene, a waterfall of little multicoloured houses perched on its sides.
Between the houses there are narrow streets and stairs, with boutiques, restaurants, wine bars by the sides, all ending downhill towards the sea front.

Above Positano (about 3 km) is the small town (think perched village) of Montepertuso. Montepertuso is dramatically situated on a cliff 1000 feet above sea level, you can drive here (there is a trail you can hike to get up here, if hiking is your thing, you can also take the local bus). There’s a huge hole in the mountain at Montepertuso (only 3 mountains in the world have these "holes", one is here and the other two are in India) and there’s a legend associated with that hole in the mountain. It seems the devil was taunting the Virgin Mary to cross to the other side of the mountain by blowing through the wall. Mary accepted this challenge (to the devil’s surprise), yet the devil had to go first. The devil tried to in vain to blow through the wall, he failed. Then it was Mary’s turn and she placed her finger on the mountainside and blew, amazingly, the wall opened and that’s the legend of why there’s a hole in the mountain of Montepertuso.
There’s a town festival each year where they re-enact this challenge.

Further up Montepertuso at about 2,5 km there is Nocelle, which is the highest and oldest village of Positano. Nocelle is a tourist destination for its proximity to the mountain Lattari and the Path of the Gods, perfect for those who love the trekking/hiking trails.

Spiaggia Grande, the main beach in Positano.
Other small beaches are Fornillo, Arienzo, Fiumicello reachable by foot or boat.

The center of Positano is dominated by the coloured majolica cupola of Santa Maria Assunta’s church, that dates back to the 1200s, and it is home to a wonderful Byzantine icon called “Madonna di Positano”. Positano is one of the most romantic towns along the Amalfi Coast.
Since 1800, the magic of the town has fascinated writers and artists from all over the world, such as Goethe, Steinbeck, Picasso and Diaghilev. Even the world of cinema was seduced by its beauty: Rome's legendary Dolce Vita found its home from home right here in Positano.
Positano is also internationally known for its clothing production: many little, but elegant boutiques, which are almost everywhere on both sides of streets and lanes, can satisfy all the requests of a cosmopolitan clientele. 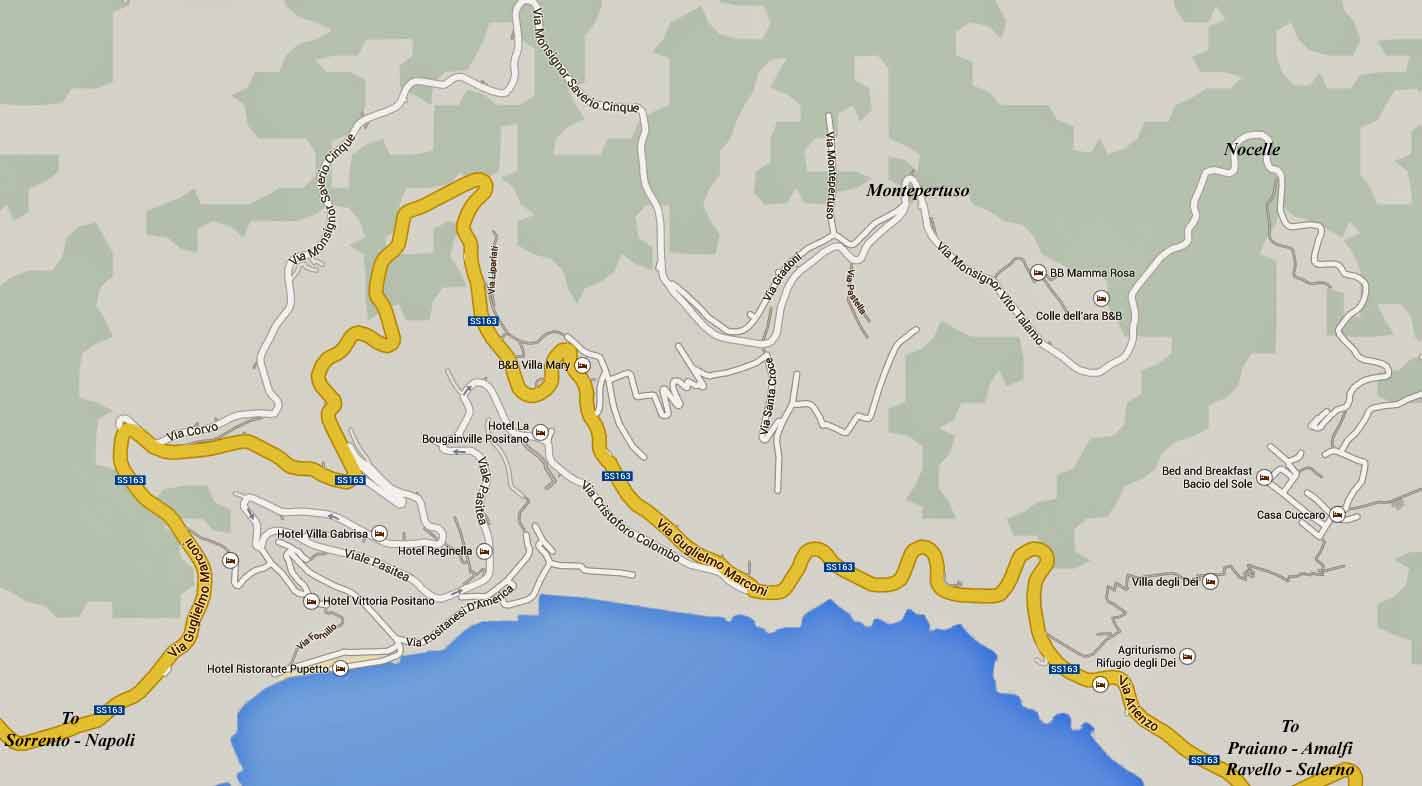 The main Amalfi Coast road is SS163 (Yellow color on map) Positano has an internal one way road called Viale Pasitea In order to get all the way down to the beach you will need to stop your car in a car park (no free parking here) half way down Viale Pasitea and walk through the pedestrian zone of the village, shops, cafè, restaurant, beaches.

Note: On those buses Unico Campania tickets are not valid! The charge to ride the orange or red small bus around Positano is € 1,30 if you purchase your ticket from a local shop, or € 1,70 if you purchase directly from the bus driver.

In front of Positano, few kilometers from the coast, there are Li Galli, 3 solitary rocky islets called: the Gallo Lungo, the Rotonda and the Castelluccio. In old ages Li Galli were meant to be a reference point for the sailors, if they got too close to land, they would end up on the rocks.
In 1924, on the islet of Gallo Lungo the Russian dancer Leonide Massine built a Villa, few years later it was bought by Rudolf Nureyev. Positano dedicates to these artists the international Dance award.

The trip down is easy, the trip up, not so easy, take your time, have lunch, stroll back to your accommodation or reach the point in town where there are taxis and buses such as the Interno Positano that will take you back to your villa.

"Street Food" May 2nd-4th  (Beach "Spiaggia delle Sirene" 4pm - 12am); Positano organises unusual tasting trails through the food and wine traditions of this region and of others that have taken root in Italy and abroad, in particular in Africa, Asia and Latin America.
There is also a jamboree of international artists in different fields

"Festival of San Vito", June 15th (Church of Santa Maria Assunta): in honour of the Martyr, protector of Positano.
After the church service, the statue is carried in procession down to the beach; there is a folkloristic musical show, a brass band playing along the streets of the town, and fireworks over the sea.

"Festival of the Assunta", August 15th the evening of Ferragosto. Many hundreds of boats, from Sorrento, Capri, Naples and the whole of the coast come to assist at this spectacular fireworks of the Assunta, display over the sea.